Though this milestone is an exciting development for Singapore, and perhaps Asia as a whole, it came as a setback to those in the United States who hoped Washington would sign a digital trade agreement first. After all, when President Joe Biden assumed office in January 2021, the prospect of a U.S.-led digital trade agreement (DTA) dominated foreign policy discussions about the Indo-Pacific region. [2] Lawmakers from both parties agree that the United States must re-assert itself as a leader in Asia, especially on trade issues. [3]

As President Biden nears two and a half years in office, he unfortunately does not have much to show for his once-ambitious Asia agenda. Competition with China demands Washington’s attention, but that does not mean advancing partnerships with Asian allies should take a backseat. Instead of placing all of President Biden’s Asian eggs into one Chinese basket, the administration should broaden its foreign policy toward the region, starting by negotiating a region-wide digital trade agreement that can potentially include China only if it meets certain standards. Doing so would ensure that trade keeps pace with modern-day electronic commerce, promotes American goals in great power competition, and preserves liberal democratic values in the Asia-Pacific.

Prospects of a U.S.-led DTA in the Indo-Pacific commanded so much attention after Biden’s election because it appeared to be the best available compromise between proponents and opponents of American participation in the Trans-Pacific Partnership (TPP). The TPP was a proposed free trade agreement (FTA) involving Australia, Brunei, Canada, Chile, Japan, Malaysia, Mexico, New Zealand, Peru, Singapore, the United States, and Vietnam. It was never ratified by Congress, and after President Trump withdrew the United States in January 2017, the remaining 11 countries signed a new Comprehensive and Progressive Agreement for Trans-Pacific Partnership (CPTPP) on March 8, 2018. [4] By leaving, the United States relinquished its capacity to shape trade policy in a region that may account for over half of global consumption growth in the next decade. [5] Leading a DTA could change that.

DTAs are the trade agreements of the future. [6] In her statement at the G7 Trade Ministers Meeting, U.S. Trade Representative Katherine Tai indicated that the ministers “clearly expressed our shared values and opposition to models of digital authoritarianism and digital protectionism.” [7] Like regular FTAs, DTAs enact rules and regulations for international commerce but address the digital realm. In addition to developing norms for cybersecurity and internet sovereignty, DTAs set standards for general data usage, storage and transfer, electronic transactions across currencies, data privacy laws, and more. More importantly, DTAs can promote principles of openness, inclusiveness, transparency, and fairness by endorsing common standards. In this way, DTAs not only stimulate the global economy, but also shape economic statecraft.

There is still a window of opportunity for the United States to re-enter the trade negotiation space with Asian partners and re-claim its influence in trade. With trade of digital services between the United States and Asia growing rapidly – up more than 50 percent since 2010 – trade agreements will need to be upgraded to address data localization requirements, data flow and protection measures, online cross-currency transactions, and other demands of the modern day. [8] Since joining the CPTPP could be viewed as contradicting President Biden’s worker-centric foreign policy agenda, and the president no longer has “fast track” authority to even do so since its expiration in July 2021, introducing a DTA, limited in scope but unrestricted in impact, is the best course of action.

With the future of U.S.-China relations uncertain, stepping up to lead a DTA in the region is both economically and strategically beneficial to the United States. Not only does the United States stand to gain from enhanced digital trade with Asia, but Washington also benefits from reassuring its Asian allies and partners of its strategic commitment to them. The U.S. Chamber of Commerce has deemed a DTA an opportunity for both small- and medium-sized businesses and the U.S. services sector alike. Enhancing both allows the United States to better compete with China. Furthermore, by applying to join the CPTPP, Beijing is signaling standards-setting ambitions, hoping to become a regional – and global – trade leader. If President Biden opens negotiations for a DTA, he could revive American involvement in the region.

Most importantly for American grand strategy, however, is the fact that such a comprehensive agreement will serve as a template for future multinational agreements. Smaller-scale DTAs already exist, such as Chapter 19 of the United States, Mexico, and Canada trade agreement (USMCA), the U.S.-Japan DTA, and the UK and Singapore’s newest DEA, but the reach of a U.S.-led DTA in the Indo-Pacific will be massive, eventually spanning far beyond the region itself. It is imperative that a democratic country like the United States leads these agreements to preserve liberal democratic values of openness and transparency as the world adapts to the digital age.

Drafting and signing a DTA takes time, but a few policy prescriptions would better position the United States right now. First, President Biden should prioritize digital trade in his strategy towards the Indo-Pacific region. Aligning foreign policy goals with trade policy goals bolsters both and enhances U.S. influence in Asia. Second, the USTR should review all existing U.S. FTAs to locate opportunities for upgrading American digital trade demands worldwide. Doing so ensures the United States remains ahead of the curve in setting digital trade standards. The United States should lead the digital trade conversation within global institutions, especially by cooperating with other technologically advanced countries. For example, spearheading discussions with the European Union, which implements one of the world’s most comprehensive data privacy laws, will help bring democratic leaders together to construct a free and open vision for the future of digital trade. Of course, taking any steps to increase American engagement with Asia-Pacific countries can only strengthen American power in its competition with China.

It is not a matter of if, but when Asian countries will one day negotiate a DTA, and it is in the interest of all parties for the United States to lead. After all, neither London nor Beijing are waiting, and neither should Washington.

Channing Lee ’23 is the President of the AHS chapter at Georgetown University’s Edmund A. Walsh School of Foreign Service, where she studies International Politics with a focus in U.S. Foreign Policy and Processes and minors in Religion, Ethics, & World Affairs and Chinese.

Image: “Science, Technology and Engineering” by Geralt, retrieved from https://commons.wikimedia.org/wiki/File:Science,_Technology_and_Engineering.jpg. This file is made available under the Creative Commons CC0 1.0 Universal Public Domain Dedication. The person who associated a work with this deed has dedicated the work to the public domain by waiving all of their rights to the work worldwide under copyright law, including all related and neighboring rights, to the extent allowed by law. You can copy, modify, distribute and perform the work, even for commercial purposes, all without asking permission. 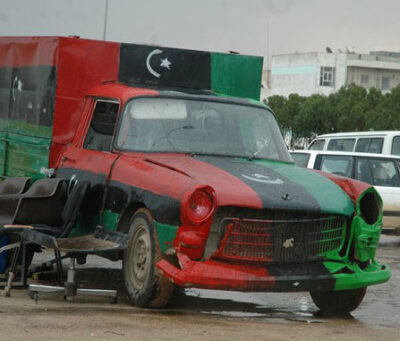 Why ISIL-Libya is Still a Threat